On the 4th rising Moon in the month of Magh, as the Moon moves through the Bhadrapad Nakshatra’s, we come to Ganesh Jayanti. Bhadrapad is

The Bhadrapada Nakshatra’s connect the Kundalini serpents of fire & water, Moon & Sun. When Fire and water meet, we have steam.
This steam is known as the Gandanta point.
This is the place of extremity where Karmic knots are revealed so as to be opened. Gandanta literally means the end of the knot.
Ganesh is the force of opening the Gandanta of Karma that obscures and restricts Kundalini Shakti.
Tantric scripture tells us that when Kunadlini Shakti is aroused, she has the force of an Maste (wild) elephant.
Working with inner and outer trunk Mudra of Ganesh – with its two channels – is the bringing together of the dual ‘Badrapadic’ force that arouses Kundalini Shakti.

Ganesh Jayanti is the birth commemoration of Ganesh that occurs annually .
4 is his number and he rules the 4 tangible elements.
His trunk breathes the 5th subtle element of Akash (ether) between and beyond Gandanta dualisms.
There is a form of Ganesh that deals very specifically with the dual nature of reality, and the junction where the stream between Gandanta is created… that steam is Akash…
That will be written about soon.

This makes Ganesh the lord of the Panchabhoot (5 elemental spirit energies).
In fact, he is lord of the Gana, as his name Ganapatti implies.
The Gana are all manner of beings and races of spirit… Patti is the friend of them all.

Ganesh Jayanti, or simply known as his birthday, presents a potent lunar junction, and is a night on which Tantrics ritually worship Ucchista Ganapati.

All that which we turn away from and deny is the essence of his Ucchista worship.
Ucchista, or rather spoken as Uchchhishta, is a word of many connotations. In essence it means things that disgust or are rejected by us.

What have we rejected!

Ucchista Ganapati Sadhana can show us that if we favour something, then we might deny something.

If we are heavily devoted to one thing, then we might me be sternly ‘undevoted’ to another thing.

Ucchista Ganapati worship is not merely about going into forbidden stuff. But it is the study of that which we oppose.

Why do we oppose what we might be opposing?

This question is loaded with a profound Tantric investigation that can take us deep into the very roots of awareness.

The extent to which the opposite is denied is a profound Tantric study of balancing the dualisms of heart, body, mind and soul.

We might be into the devil if we oppose the church.

It is indeed a necessity of life to favour a mode of being over another.

But if we have a strong favour to one mode, then it can imply a strong aversion to another.

Half the power of our pursuits may be coming from fighting against the opposite of that which we pursue.

This phrase is worth to read a few times over… if you will.

It gives us power to stick to one thing certainly… it is the art of devotion and focus.

But to be Bhakt (devoted) is a profound study, and not just made up of sentimental, favourable, or blindly dogmatic elements.

The great epic of Mahabharata, is a worthy story of meditational pursuit.

In there, it points to devotion as having nothing to do with our preferences and tastes.

It is a deep thread about the wisdom study of devotion… dressed up in stories of tragedy, violence, curses, oaths and even revenge.

But the duty of the heart that it is getting at, is pure Tantric devotion.

When we pursue a preferential path of devotion that is stiff and immovable, then it can imply that we are apposing something.

Opposition to something gives us power yes , but it takes power at the same time, and leads to ‘spiritual exhaustion’.

The Tantrics have fluidly moved with the Moon.

The Parampara of Chandra is the fluidity to sway as the Moon does.

The Tantric melts and learns the great fluidity of body, heart, mind and soul.

To align to the fluidic fluency of the Moon.

If we like sweet things, then it would seem natural that we choose a sweet devotion.

Or it we like hard edges, then it would seem natural that our devotion is hard-edged.

But what about the ability to shift between both?

Devotion is found in fear.

Devotion can be found where we reject something.

This is the hidden meaning of Ganesh as the lord of Gandanta… who is birthed in Bhadrapad.

What is Bhadrapad but the ,Gandantic’ devotion between extreme opposites.

Oh it’s often said that Ganesh is born in the month of Bhadrapad which comes later in the the year. That is not his birth constellation, but is the time when he curses the Moon to become inauspicious.

It is known as Rikkt Tithi, which implies emptiness.

The elephantine force of Ganesh, fills the emptiness, and stabilizes the stray psychic waves, hence Ganesh is Tantricly worked with on each Monthly Chaturthi (fourth lunar night).

There will be more about Ganesh Chaturthi in due course.

Some outward things may be rejected and repulsive, yes certainly.
But what about the inner things that disgust us?

Who or what do we reject?

What do we reject in ourselves?

What happens when we face that which we consider to be rubbish and shit?

What happens when we give our love and devotion to that which we consider rubbish and shit?

Wheter it’s a feeling, a thing, or a person that is rejected.
Ucchishta Ganapati worship is in essence about going beyond rejection, and towards the unification dualities.
He is all about the study of that which draw us out of Yog.
Yog means Union, and union is love.
Love is the place beyond dualities.

The power of Ucchista Ganapati is that he rejects nothing.
He is not selective, but has the all embracing heart of love.

The love of Ucchista Ganapati is symbolised by his immense size. His stature is such that it causes creation to stretch its limits just to accommodate his love.
His infinitely long trunk can go anywhere.

In our potency we are Ucchista Ganapati… beyond dualisms.
Does that mean that in our impotency, we are selective and rejective?

Is it dualisms that create battle within.. and war of all kinds outside?
Battle may be a minor rift, or a whole damn genocide..
Does it start with dualities rejecting each other?


Ganesh Jayanti falls within upon the 4th night of Gupt Navaratri,

Gupt Sadhana encompasses the Madhyama style of internal Mantra. Commonly thought of as whispering, but it also has another aspect of internalising some syllables on the inbreath with the Ucchista Ganapati Mantra.
Such Mantra practice brings the hidden and the revealed into a meeting with each other.
Ganesh has two primary aspects that wonderfully convey this principle of the hidden and the revealed meeting.

Moksh is often called liberation, the word liberation has many connotations that are worth to ponder.
The all embracing expansion of Ganesh is the love that liberates from the battle between dualities.
Moksh is love. 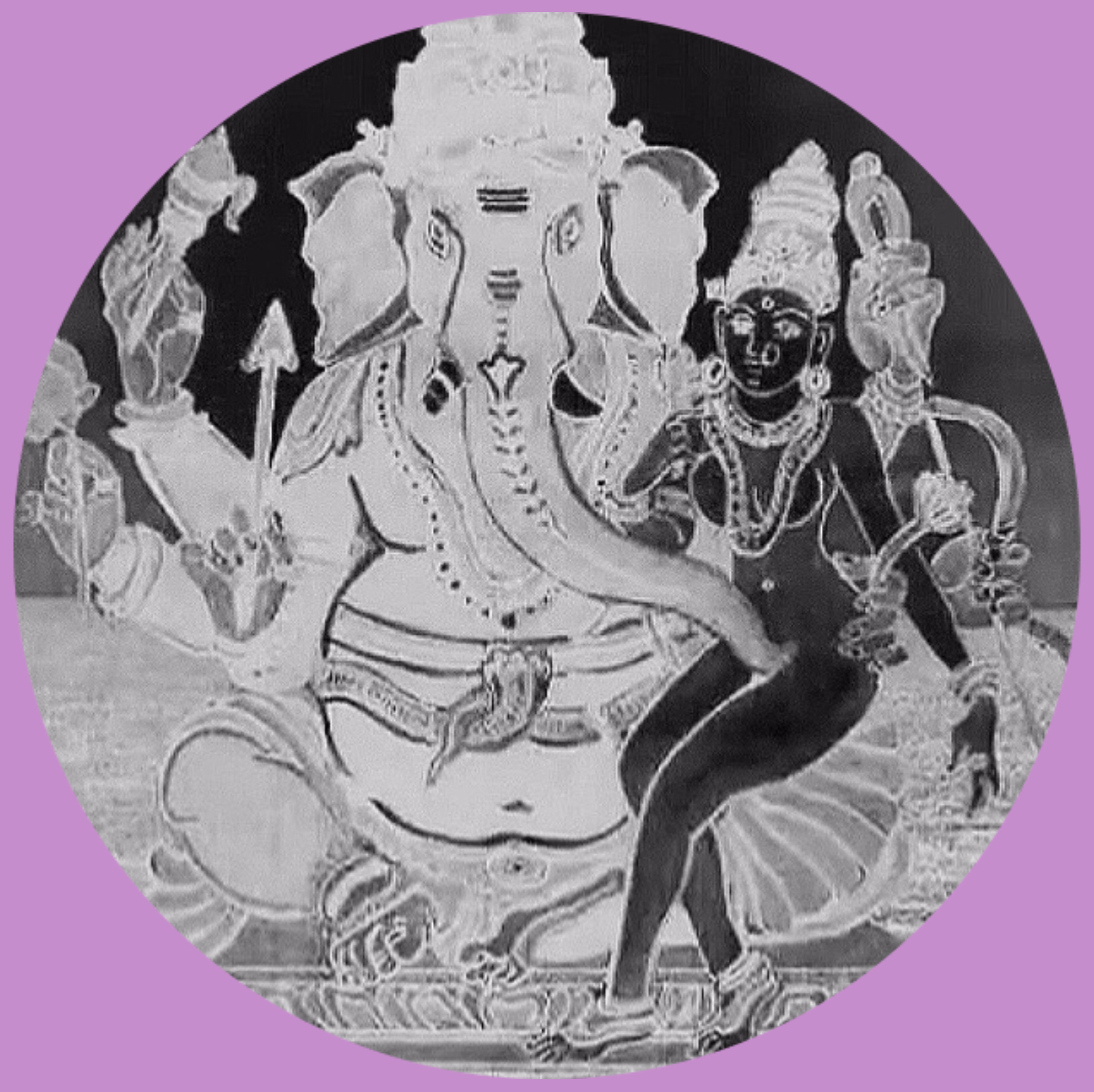 Ucchista Ganapati brings Moksh to sexual energy imprints.
His Mudras are very much concerned with resolving the sexual history and energy imprints that we might be carrying.

Ucchista Ganapati is Shakta of the Shakti who is Chandalini Devi.
She is the woman who celebrates all taboos unto the extent of there being nothing dirty or impure left.

Ucchista Ganapati is the one who makes love eternally to his Shakti… His Shakti is she who goes by the name of Chandalani Devi.
Once again, let it be said that she is the woman who celebrates all taboos unto the extent of there being nothing dirty or impure left.

Chandalani Devi represents the forbidden. She is that which we might deny.

She is the forbidden.

Ucchista Ganapati denies nothing in the great design of cosmic forces that the Tantrics know as Shakti.

This is the reason behind Ucchista Ganapati’s indominatable, undiminishable potency and force of love for everything.

Chandalani Devi is known as Vaak… that is the cosmic sound.

Together they are cosmic symphony… The great ‘Concerto Universum’.

In their Tantric union they can swap roles and he assumes the role of instrument and she the mistress of music.

They both play the Seven stringed Vena.
Three base drone strings and 4 subtle melody strings does the Veena have.
Meditate if you will, upon the significance of the 3 base note Chakras that provide the ground for those Chakras above the Kaalbhand (diaphragm)

Oh that celestial instrument of mystical, magical love so supreme, played by the Gandarvas & Apsaras who dwell – in etheric sound form – in their ‘capital city’ of the Gandarva star constellation

Chandalini Devi is always with Ucchista Ganapati.
Together forever in infinite Tantric embrace.
They are the great sexual energy of ShaktiShakta that opens the door to the cosmos of love.