TARA JAYANTI 10.4. * You who nursed Shiva with your healing milk When he suffered for drinking too much poison. You are the twilight sanctuary that heals the most poisonous of places. 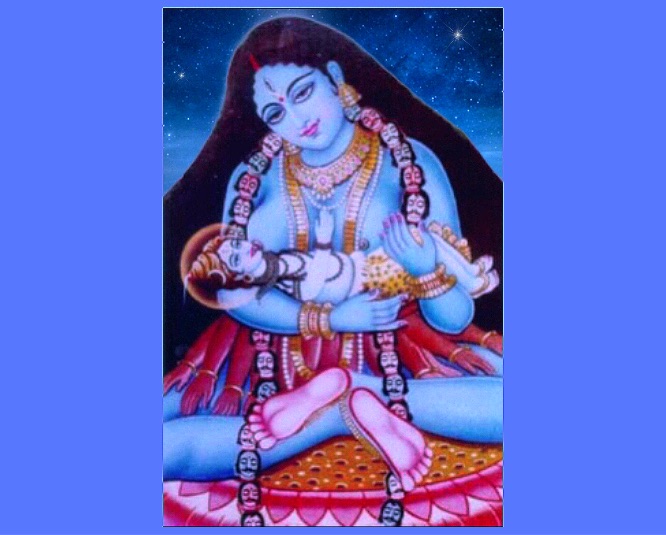 SUNDAY THE 10TH OF APRIL

Tara, you who’s name means Star.
Goddess of twilight blue complexion.
You who nursed Shiva with your healing milk
When he suffered for drinking too much poison.
You are the twilight sanctuary
that heals the most poisonous of places.
To you we bow.

Tara is a frightening Goddess to behold.

The fear that she induces though gives the wisdom of converting poison into medicine.

She appears only at night, just like her name implies, Tara means Star.

Tara fed Shiva with the healing blue twilight milk of her starry breast.

The story tells us that when Shiva suffered great turmoil for drinking the Halahal poison, Tara came to him in maternal compassion and offered the milk of her breast which healed him.

Hers is the twilight milk that dissolves the sharp definitions of dark and light, of pleasure and pain.

Tara’s annual ritual Moon takes place upon the first rising half Moon after the spring equinox. The half illuminated and half darkened Moon reveals the balance of the opposites that Tara is.

Tara’s Jayanti, falls under the celestial influence of the Moon in the Nakshatra (Lunar Mansion) of Pushya. This is a motherly constellation of nourishment that shares parallel symbols with Tara of a flower and a nurturing milk filled udder or breast.

Tara is the crossing of the middle line,
She traverses borders both visible and invisible.
She dells in places not usually traversed
where dark & light, pleasure & pain,
life & death meet
and pass each other’s thresholds.

Her residence is in the place where life and death meet. In Tantric initiation into Tara the aspirant worships Tara in the Shamshaan (cremation ground), in a place where they are starkly confronted with the reality of both life and death both.

Tara is a confronter indeed. She wears a necklace of skulls.

Sometimes she is distinguishable from Kali Ma by this detail alone.

It is a deep subject of meditation as to why Tara has skulls as opposed to the freshly cut heads that Kali Ma wears for a necklace.

On this ritual we shall investigate pleasure and pain and apply her Mudras. Tara’s Mudras are challenging physical and psychic maneuvers. Her Mudras can reach into far off places in our being, and help in melting the most tenacious of Granthi‘s .

The Granthi’s are the psycho/physical knots join the sacred heart.

Her Mudras involve some of the most challenging aspects of Hatha Yog… as the body is twisted and the gaze is taken to the most unusual and unfamiliar of places in both a physical and a psychic sense.

Through the law of reflection, the gazing into unfamiliar physical places is transferred into the revealing of the unfamiliar psychic levels of our being.

Tara teaches her lovers
the wisdom of seeing
through the eyes of the Witch.

That which is hidden comes into view. The Mudras of Tara, involve twisting and backbending at the same time, they confront the places where our inner worlds meet and divide.

Tara Mudras open up the Kala Bhand – (literally the dark bridge) this is the diaphram area of the body, a major junction of psychic energies that unites the instinctual Chakras below with their reflections above.

Tara Mudras are greatly challenging, but they are the Mudras that make us acutely aware of opposites and the place between.

Tara dwells on the outskirts, like a star in the sky on the edge of the spherical canopy of night. Always there, but only seen fully in the natural and unpolluted darkness. Tara is the Mistress of the starlight, and the natural dark.

Her annual Jayanti (birthday) is Ardha Chandra, the April half Moon, for half of it lies within view, whereas the other half stays hidden in the shadows. Her Puja (ritualistic worship) works with the star portals that shine between the known and the unknown.

In appearance Tara looks like Kali Ma, there are a few differences that can be discovered by the vigilant. For instance, Tara is often depicted holding the mystical blue flower of Neelkamal, a flower that if prepared in a specific way and imbibed, gives admittance to secret places, both terrestrially and ultra-terrestrially. The blue flower is the star flower, around which this healing ritual will move.

Tara gives the scent of the mystic blue flower when she is approached. Her flower that only blooms at twilight assists us with looking into those spaces where we don’t usually look, forgotten and out of sight places.

that which is perceived and easily disregarded as poison turns into medicine under the twilight gaze of Tara.

Tara is the she who holds the magical lore of lost and unfamiliar remedy. The remedy that the straight eye of common convention fails to see because it is not directly in front.

On this ritual night we might find ourselves to be looking round some long lost corners for the blue magical flower that is Tara.