SHUNI JAYANTI | 29.5. * The ritual of Shuni Jayanti is all about attempting to get in touch with our shadow side. The shadow is ever there, but can go unseen. 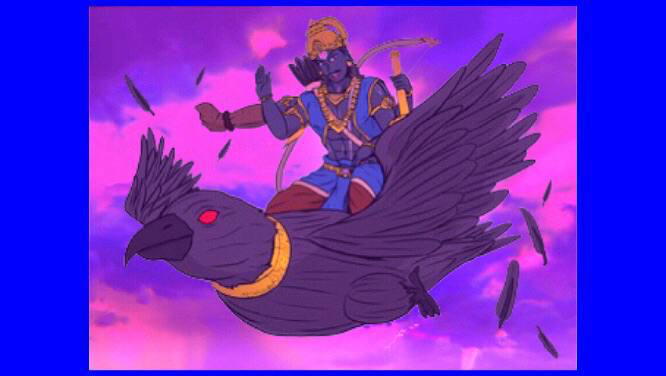 THE BIRTHDAY OF SATURN

SUNDAY THE 29th OF MAY

He is the ruler of Tantric practices
and his gaze ever looks down
to the roots of things.

The ritual of Shuni Jayanti is all about attempting to get in touch with our shadow side.

The shadow is ever there, but can go unseen.

The Shadow is that part of us
which is made up of denied, feared,
forgotten & repressed feelings.

Shuni is the king of the planets. He makes us face the unresolved Karmic imprints that we carry behind the veils of awareness.

The unconscious imprints and seeds of Karma buried deep in our soul can be projected into the growth our lives. It is Shuni who brings the unseen shadow to awareness.

Shuni is considered as the grand malefic planet that brings suffering and distress.

What he really does is to excavate buried treasure.

He does this by digging into the shadow realms of our soul.

Shuni brings about deep healing by addressing of the very roots of the Karmic imprints that reverberate and resonate into the field of life and love.

Shuni is the celestial dentist that pulls the rotten tooth. It is not a pleasant affair, but it is necessary to go on living healthily.

He is the grand sober reality, and his flight spans the infinitely numerous psychic matrices that impress upon reality.

If we hold to the past, we lose the focus of where we are now.

Letting go of the past is no easy trick of the mind. It requires a journey of releasing ourselves from the grip of the Karma that holds us, and which we are at the same time perhaps holding.

Extracting a diaphanous silken sheet strewn into a bed of thorny roses is a delicate affair. Saturn reminds us that sheet of the soul can’t be yanked free in one fell swoop.

It could be said that, getting the vision of the Shadow world is the beginning of the path of Tantra.

And that, the integration of the Shadow, is the living of Tantra.

The Saturn-related ritual pursuit that we will attempt on the dark Moon of Shuni Jayanti, has the potential of bringing to awareness, that which we do not usually see.

NOTE: For this ritual you will require a darkened room and a candle in-front of you that casts your shadow on a wall behind you.
Those in different time zones, where it is daylight at the time of the ritual, may either darken their room, or choose to receive a recording of the ritual to practice at dusk, when the shadows come to life.

The Hatha Yogic practices of Mudra and Mantra that raise the unconscious forces will be undertaken at this particularly favourable dark Moon junction of Shuni Jayanti.

The inner and outer Crow Mudras, and the Chaya Karana (shadow practices) will be particularly emphasised.

The Mantras related to the Crow use specific Bija’s, or seed syllables, that activate the unconscious sides of our Chakras.

In Tantra these are often secret Mantras that are carefully handled, as they have a very strong effect to arouse the latent spirits.

Intonation is a large part
of the Tantric arts and sciences.

In this ritual, we will delve into the Mantras of the Crow, in a unified circle that crosses the bounds of time and space.

The Crow sounds resonate at particular frequencies of sound vibration, that activate the Chaya Nadi’s (shadow-energy-lines that are latent).

Much of the Tantric path of healing involves bringing to the ear of awareness, the spirits that silently rule us from the unconscious.

This will be the focus on this dark Moon ritual.

Unseen Karmic imprints that we may be carrying can be brought to awareness for healing when evoked from the unconscious depths.

The Tantric summons the deep undercurrents behind and beyond awareness, and learns to let the river of Karma flow.

In the Tantric teachings, Shuni (Saturn) is the dark lord of bringing us to face the Karmic mirror of our consciousness.

He is a grand healer who makes us aware of the reverberative effects and causes that we carry in the depths of our being.

The Tantric teaching stories even tell us that Shuni’s gaze is ever down to the underworld.

PROTECTOR OF THE FEMININE

The entrance to Shuni is through the femminine.

His Mother is Chaya the Shadow Woman, and his father is Surya the Sun.

His Mother was not able to realise her power beside her Husband the sun, for his glow burned too brightly so as to make her feel overwhelmed and insignificant.

And so she fled… leaving behind her shadow.

This signifies how the feminine is brought into insignificance when the solar active day force rules over her receptive night force.

Shuni is the great Karmic balancer
who creates union based on the laws of
balance & justice on all levels of being.

Having left her Shadow with her husband the sun.

Shuni’s mother while still pregnant with him, performed prayers and Yogic austerity to Shiva under intense heat.

Her Tapasya (Yogic effort) was so intense, and the heat generated, so hot, that her child Shuni, was burned black.

This signifies how heat and Tapasya (Yogic purifying fire of austerity) reveals the darkness within the unconscious recesses of one’s being.

When Shuni was born and seen in all his blackness, his father was shocked at how dark his child was, and refused to recognise him as his own.

The sun started accusing his wife of being unfaithful. He raged greatly and insulted his her.

Shuni thereby cast a single glance
upon his father the sun, causing him to lose all his light
The previously radiant father was burnt
to utter blackness by the gaze of Shuni.

This represents the astrological impact of Saturn and why he is Known as the dark planet. when Saturn appears astrologically upon the sun, all light is darkened and the unseen is highlighted.

Saturn has the ability to take away all light within us, and take us into the parts of ourselves that have previously not been seen.

Considering the above story, it is of note, and a worthy subject of study and meditation, that Shuni Jayanti occurs annually in the sun ruled fiery Nakshatra (lunar Mansion) of Krittika.

Tantric methods of focusing upon ones shadow,
can eclipse the solar vision, and make us aware
of the spirits of the unconscious world
that colour our lives from behind the scenes.

By ritually attempting to focus upon the Chaya (shadow forces), they can brought to the altar of awareness for integration and healing.

The central detail in the story, that Shuni’s gaze is invoked by seeing his mother insulted, highlights a very important Tantric point: namely, that Shuni is the protector of the feminine.

His slow Tantric rhythm is punishing and crushing if the feminine is not honoured.

The subtlety of this symbol conveys how, if we ignore the feminine rhythms of our being, we will face great darkness.

Tantric law is the protector of the feminine mysteries that our civilisation and culture might blindly ignore at a price.
By following nature we become Tantric, and restore inner order.

Shuni is the restorer of order, both cosmic and microcosmic.

IF TRUTH BE TOLD, SHUNI IS TRUTH

← DHUMAVATI JAYANTI | 7.6. * Dhumavati is the intensely ugly Widow Goddess, bitter, barren and bereft of Beauty. She holds the deep wisdom of age and loss. TWARITA DEVI | 22.5. * The half Moon junction is the time of unification of opposites, when the fluidic forces of the central spinal channel channel are activated →