MAHA SHIVARATRI | 1.3. * This ritual night is dedicated to Shiva’s devotion to Shakti. 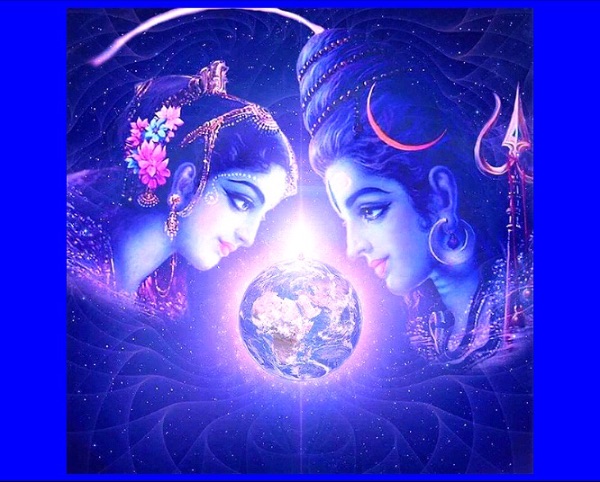 TUESDAY THE 1st OF MARCH

This ritual night is dedicated to Shiva’s devotion to Shakti.

In his devotion to the eternal mystery, the grand Yogi Shiva suffuses himself in her swallowing Moon of swelling darkness

Shiva is the original legendary teacher of the Yogins. Maha Shivaratri translates quite literally as ‘The Great Night of Shiva’.

The Night here is the all-absorbing force of Shakti, and Shiva is the one who surrenders to her.

The last whisp of crescent Moon that appears just before sunset is the focal point in this ritual.

This Moon junction is of deep import

to the feminine Shakti principle.

Each month has a Shivaratri Moon, but this is the Maha ‘great’ Shiva Moon… the last of the season where nights are still longer than days.

The teaching is that the mind of Shiva is in this world by a tiny whisp that is visible just before the lunar glow becomes absorbed into the last dark Moon womb of Shakti in the season of darkness… it’s her last embrace of Shiva.

This is a night of absorption

into the feminine secrets of Shakti.

It is a night when the feminine Shakti

principle is surrendered to.

Shiva is known as Chandra Shekkhara, which means, ‘the one who wears the Crescent Moon Crown’. The whisp of crescent that he wears as his headdress is a reminder of Shivaratri.

Maha Shivaratri is the uniting of the the deepest valleys with mountain heights.

This is the uniting of Shakti and Shiva. This is a night of melting into the secret wisdom that is born of their embrace.

Shiva has the goddess Ganga – the Goddess of the sacred river Ganges – flowing from the top of his head from the Gangotri point. This is the pinnacle point that meets the highest, and in a river like flow… flows to the deepest valleys of Shakti.

Shiva has the third eye

that unites the polarities and opposites

by glimpsing the place between.

Shiva has an endless array of forms that express the numerous facets of his being.

He is Adinath – meaning the original teacher of the Yogins.

He is Bhairav the terrifying and Rudra the raw.

When we meditate upon and look closely at the many forms of Shiva, we may get a glimpse of what lays beneath the eclipsing characters of self that dance upon the foundation of wisdom. This in turn might get us to look at ourselves and study our true foundations or the lack of them.

Shivaratri is the Tantric ritual night of honouring the very roots and foundation of wisdom. The endless forms of Shiva, point to expressions of a character, or a state of being that manifests from the roots of wisdom, and not the peripheral levels of self and intellect.

Traveling through the structures

unto the very foundations and roots of innate wisdom

is the teaching of Shiva…

from intellect to intuition it could be said.

This ritual night will be an investigation into the original wisdom of the soul that can get eclipsed by ‘other’ forces. Though those ‘other’ forces are an important part of our lives, they are no replacement for the foundation of being and the absorption into the endless mystery buried deep in the breast of Shakti.

← DURGA | 10.3. * We will Meet under star-sprinkled sky for Tantric Yogic ritual upon this coming half ascending Moon of the Goddess.  KULASUNDARI | 24.2. * In this ritual of Yogic healing, we will be swimming into the depths of family healing to discover the pearls and jewels of ancestry.  →