KHODIYAR MAA | 8.2. * Khodiyar Maa is a Goddess of Sexual Healing. She rides between earth and water on the Crocodile. 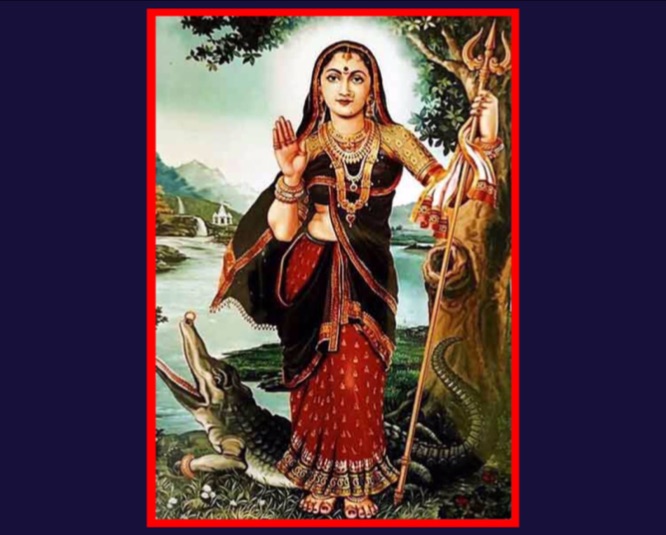 Tuesday the 8th of February

She is a fearless Goddess

who rides into underworld depths

for the sake of the sacred heart

Khodiyar Maa is a Goddess of Sexual Healing. She rides between earth and water on the Crocodile.

Khodiyar Maa is ritually worked with by Tantrics on her annual Jayanti which will be on the coming half rising Moon.

The Tantric ritual of this night will be about condensing and concentrating our forces to align with the Goddess of the base and sexual Chakras.

For the ritual altar, please have a handful of earth collected from your locality and placed in a bowl.

Have also a vessel that is half-filled with water.

In any branch of life, focus of force is the law for creation

Tantra is a practical subject that magically accesses the Goddess energies through concentrated techniques and ritual applications.

Tantra works with a detailed system of aligning to astral and lunar currents.

Mudra and Mantra become doorways for linking our lives to the energies of the Goddess.

The half rising Moon of Khodiyar Maa’s tells us of the secrets of the crocodile.

The crocodile is an amphibious creature that can transition between earth and water.

These are the elements that rule the base Chakra and the sexual Chakra.

The crocodile is the animal of the Second-Chakra, it sits in the sea of the watery sexual Chakra, poised between earth and fire.

This is the half brightening year initiated by the the crocodile.

Uttarayan is the period of rising sexual energy, where the Kundalini climbs through the Chakras by the pull of the magnetic celestial currents upon her.

The base Chakra is linked to the earth element, and the second Chakra is ruled by the water element.

In Tantra, the crocodile is the creature that symbolises the water-ruled sexual Chakra.

Tantrics work with the crocodile energy and the base and sexual Chakras upon this ritual day by the application of appropriate Mantra and Mudra.

The awakening and healing of the crocodile-ruled sexual Chakra is a primary occupation on this ritual junction.

The story of Khodiyar Maa relays a narrative of yogic symbols, relating to the healing of the base and sexual Chakras.

Her story shows how she transitions between the elements of earth and water.

She rides upon the back of a crocodile – her Vahaan or power animal – to bring the healing elixir of love up from the depths.

Sometimes the elixir of love gets buried in places deep

Khodiyar Maa has temples that are often located next to rivers.

In some parts, legend has it that a real ancient crocodile emerges from the waters to give Darshan (vision).

Makara the crocodile represents the dual potentials and polarities of the sexual force… able to root into the depths while equally able to rise and reveal.

Khodiyar Maa is a Goddess who stops at nothing to assist the living and the loving.

Khodiyar Maa is linked to the womb and to childbirth. She is a goddess of the fertile zones of life and helps in issues of fertility, virility and child conception.

Khodiyar Maa is a powerful Matriarch of deep compassion to those wishing to work with the sexual energy and its healing.

She is a Goddess who shows us how to unite the energies of Earth and Water.

Healing first and second Chakra themes are her speciality.

We will be evoking the deep healing force of Khodiyar Maa on this night.

She is a Goddess who addresses physical handicaps and impediments. Indeed, her name means ‘the Goddess who hobbles and limps from an injury’, as she herself has an injury that causes her to limp.

She is a wounded healer who has

because she knows what it is to suffer profoundly

Khodiyar Maa addresses emergencies and is a profoundly helpful force that will stop at nothing to address the problems of life and love.

She knows no fear and will travel to the deepest depths for the sake of the sacred heart.


Sorry, this event is expired and no longer available.
Skills Posted on

← KULASUNDARI | 24.2. * In this ritual of Yogic healing, we will be swimming into the depths of family healing to discover the pearls and jewels of ancestry.  GANESH JAYANTI | 4.2. * This ritual night is concerned with foundations and grounding →