KAAL BHAIRAV ASHTAMI | 19.07. * ‘Tis the Moon where dark and light kiss just before falling unto the mystic darkness of Amvasya. 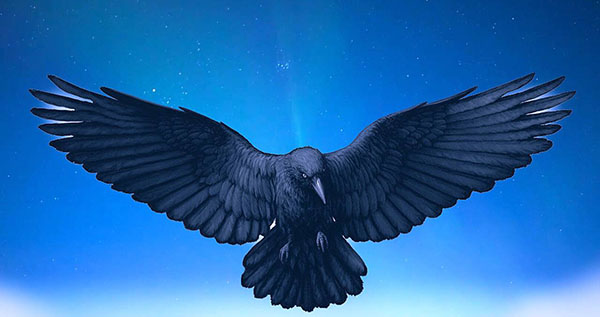 WAY OF CROW AND DOG

Tuesday THE 19th OF JULY

NOTE: For this ritual you will require a darkened room and a candle in-front of you that casts your shadow on the wall behind you.
Those in different time zones where it is daylight, may either darken their space, or receive a recording of the ritual to practice at dusk when the shadows come to life.

The Monthly Moon of Kaal Bhairav shines its lunarly beams upon us soon.

His Moon is cut right through the centre.

‘Tis the Moon where dark and light kiss just before falling unto the mystic darkness of Amvasya.

He be lord of time and the unseen half of the clock of life.

His clock is ticking with the big hand pointing out our destiny.

His left hand is pointing somewhere.

Where is it pointing?

He rides upon the Black Dog
He Rides upon Crow,
To where he is riding,
Who can know?
He rides South, East, North and West,
And places between, but which way is best.
The witches way does twist and turn,
The heart in the breast… blissed to yearn!

In this ritual we will work with his friends, the Dog and Crow.

The earth and the sky might seem separate in our time, but in his time the unify.

The Dog is a creature that sees into the spirit world and the realm of the dead.

The Dog of Bhairav represents the Southern realm of Death where all must fall in surrender.

Blooming by day,
Wilting by night,
The petal breaths in
and then it takes flight,
Every offering falls in seed,
Indeed indeed indeed.

THE DARK ONE COMETH

Kaal Bhairav is commonly called the lord of time and terror.

He holds the Kankala Danda, which is the skeleton stick of time, ever there but seen only in his dark sobriety.

Through his stick of power, he measures our lives until we sail on our next adventure: Death.

Kaal Bhairav is the darkest emissary of Saturn. On his ritual night of of the half descending Moon, we will evoke his Saturnian creatures of Crow & Dog, and initiate practices that involve our shadow.

The practice of the Shadow is known as Chaya Karana. Which literally means working with the shadow. The shadow is a doorway to many secrets. We will be looking into its realm upon this ritual night.

Death is ever there in every instant, dark enveloping womb of mystery unseen, swallowing what was… and what will never again be.

On this ritual night we will be working with the black dog of Kaal Bhairav in the South and the Crow in the North.

Under the half Moon, we will attempt to meet the deathly adventure of the unknown and unknowable magic of eternity.

The endlesss cycle,
Mirrors of infinity,
The myster,
Moves in a circle…

The dog is a clairvoyant creature that sees through the veil between life and death. When we work with the black dog of Kaal Bhairav, we call on its shadow – this takes the form of inner focus (Antar Mudra).

The shadow of Kaal Bhairav’s dog, unveils that which can’t be seen.

The shadow of Kaal Bhairavs dog, welcomes us into the unseeable with sparkling eyes that need not look and find.

The dog leadeth us towards our clairvoyant powers of mystic inner vision.

The wild black dog of Kaal Bhairav is in touch with the spirit world.

It is well known to rural folk that, when death is near, the dogs will howl outside the dwelling of the one who is about to die.

The black dog howls first and last… and maybe always.

The wild dog is a clairvoyant creature that sees through the veil between life and death.

The domesticated dog, just like some of us domesticated humans, may have lost touch with its wild clairvoyant abilities of mystic natural vision.

When we work with the wild black dog of Kaal Bhairav, we work both with the dog itself and its shadow – these take the form of dog positions, (Bhar Mudra), and inner focus (Antar Mudra). The practices of the dog can lead us towards our nature…

In this night’s ritual, we will work with various of the dog and tail Mudras. As we bark & howl our way into an investigation of our raw spiritual and undomesticated self.

These Tantric shadow practices of dog, are based on specific techniques of a subtle inner psychology. They are effective in helping us to discover, observe and learn from the shadows cast by that which we hold in our consciousness.

The secrets of the inner shadow focus of Chaya Karana (Shadow Practice), show us that shadows can’t be released without addressing that which casts them.

Nor can shadows be destroyed. Shadows move and have their secret rhythm, beauty and teaching in the inner celestial cycle of flow.

Do we flow?
Is perhaps the question?

This ritual will be an alignment to the spirit of Crow and Dog, which are the Vahaan (power animals) of Kaal Bhairav.

Such as the outer and inner Mudra, along with Mantras that imitate the Dog and Crow.

‘Tis the realm of inner shadows that the black dog of Kaal Bhairav reveals.

The spirit of the dog opens us to second sight of natural clairvoyant vision.

‘Tis the realm of outer shadow secrets that crow of Kaal Bhairav reveals.

Crow reveals the secrets of visible shadows.
All outer shadows are cast by its wing
as it flies over and whispers its teaching
to the the ear that does not deny the shadow realm.

Tantric techniques work with the shadow in a whole range of ways.

To the Yogin, the shadow is far more than the obscuration of light. It is a teacher when approached and studied in a focused way.

There are numerous practices of working with ones shadow in Tantra that take us across the threshold of time and space.

A candle before you will be required for this ritual. It should be set up in front of you in such a way as to cast your shadow on the wall behind you.

Working with one’s actual shadow can soften the hard edges of the soul and bring awareness to the balance between the night and day forces.

By giving our attention to this often unknown or forgotten friend of our shadow who is ever with us, we can come to the wisdom of that which we have forgotten and lost.

Those who have an interest in opening portals to forgotten dimensions of themselves and to the spirit world… are welcomed to this ritual of Dog and Crow.

On the the half descending Moon, it is the crow who carries the Siddhi of beautiful dark mysteries unto the Amavasya (dark Moon).

‘Tis the way of Crow

Crow is a sacred magical creature that reveals the secrets of the unseen.

Many cultures upon earth have honoured the crow as a guardian of thresholds.

The Crow is the grand Guru of the unseen… unknown and unknowable.

When we approach the crow, we do not seek to make the unknown known, but to approach it as it is.

The unknowable is the wellspring of magic. It is the heartbeat of the left-hand path of Tantra.

On this ritual night, we will ourselves perch beneath crow wing, and work with the Chaya Karana Shadow practices of Tantra.

We will work with the Bhar Chaya Mudra (outer shadow practices) of the Crow by literally focusing upon our shadow that be cast by candlelight.

Working with the shadow is a profound Gupt Mudra (secret or hidden practice) that can reveal things unconscious and unseen.

Reading into the book of shadows is a profound magic.

Without diving into the unknown and unknowable, the roots of the tree of life die and the fruit of magic cannot ripen.

Shuni Kah, as he is known to the Tantrics, is the Saturnian crow man of forgotten and unseen lore. Is he who brings us the gift of Magic.

These two represent opposites poles, but Kaal Bhairav, who be the darkest emissary of Saturn, is the one who brings them together.

We will attempt to unite the up and down, the in and out of Crow and Dog.

All this under the auspices of the Moon of Kaal Bhairav.

← GURU PUSHYA | 28.07. * This ritual will be a practice based investigation into the relationship between Tara, Budh, Chandra and Guru BHAGAMALANI DEVI | 15.07. * Bhagamalani Devi is the Goddess of fertile growth. She rules the second lunar day, known to Yogins as Dvitya Tithi. →