HAYAGRIVA JAYANTI | 11.08. * His is the realm where shadow and light gallop in synchronicity. 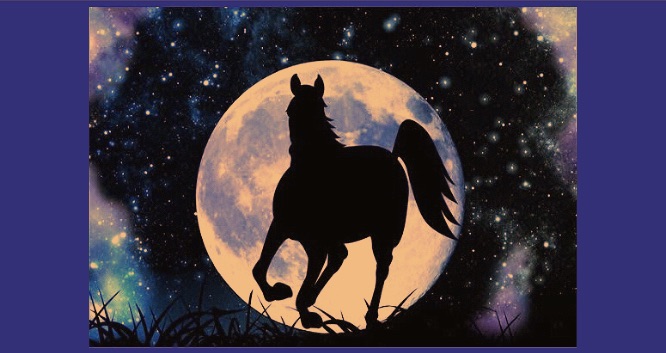 THURSDAY THE 11th OF AUGUST

The Moon sparkled so silver,
The Moon-milk-glow soothed the soul.
Was it long ago, or was in was far ahead?
But the horses head spoke wonders.
It whispered and incantation so lunar,
Silvery words that brought opposites together.
Past and present merged in love,
Maddened minds mended.
A walk on the first quarter,
A trot on the second,
Cantering on the 3rd.
Full Gallop on the Purnima
The Horse Full Moon is here!

For this ritual, please have two candles burning of on your Yogic altar.

This is the annual Moon of the Horse. Hayagriva is the horse god of twilight wisdom. His is the realm where shadow and light gallop in synchronicity.

The story of Hayagriva unfolds a narrative of how the dual forces of hot & cold & dark & light, require balance for there to be harmony.

Hayagriva is an incarnation of the universal balancing force of Vishnu.

Vishnu is the preserver of Dharma (harmonic action), and his tale, as told through the story of his horsely incarnation, specifically addresses the balance of Moon and Sun.

The essence of Hatha Yog is the balance of Moon and Sun, on both a physical and an energetic level.

When the heat of the active solar fire, meets the cool glow of the lunar night force in equality, then there is the balance that creates the elixiral essence of Soma.

Soma is the mystical psychophysical compound that flows between the balance of the two horses that this ritual works with. Soma is created in Sama (balance).

The hot solar horse and the cool lunar horse will ride us through this full Moon of sacred horseplay.

Of the 5 Panchabhoot elements, Hayagriva’s elements are Agni (fire) and Akash (ether).

Hayagriva is the teacher of the mystical alchemical art of balance.

He balances the hot fire of Agni at the Solar-Plexus Chakra, by its marriage to its opposite element, in the cool fire of Tejas at the Third-Eye.

The Solar-Plexus is the Chakra of the burning fire of Agni,
and its opposite at the Third-Eye,
burns with the cooling fire known as Tejas.

The story of Hayagriva tells of 2 horses, both of which were called Hayagriva.

One was the burning horse of fire, that for Tantrics, represents the Solar-Plexus and active force.

The other horse was a cool lunar horse that represents the Third-Eye Chakra and the receptive force.

In the colour spectrum, the opposite colour to yellow is Indigo, which is the colour of the Third-Eye Chakra.

The Third-Eye reflects the shadows of the sun ruled Solar-Plexus.

By working with the hot fire of the Solar-Plexus Chakra, we affect the cool fire of the Third-Eye and vice versa.

A balance between the two fires creates both physical and psychic balance.

Balance between the cooling and heating fires is what the Annual Jayanti day of Hayagriva represents.

The ritual techniques of balancing the two fires, is what this ritual investigation will cover.

The fires of creation and destruction meet in the teaching story of Hayagriva,

You may review the story here:

The codes of handling fire, are woven into and reflected in the narrative of the fantastical story of the Two Hayagriva horses.

We see that, of the two Hayagriva horses, one was possessed of the destructive burning Solar-Plexus fires of unconsciousness… The story tells us how his fires consumed and destroyed abundantly.

The Tantric teaching stories tell us that the sun creates shadows and is himself insensitive and blind.

The sun is regarded as being among the harsh malefic Graha’s (‘planets’) in the astrology of the Yogins. The sun is harsh, dying, dominant and insensitive to the subtleties of feminine force.

The other of the Hayagriva horses, represents becoming conscious of the shadows cast by the light and heat of solar fire.

The Moon horse of awareness, harmonises the burning overheated forces. The Moon horse brings forth balance by adding its cooling lunar aspect of consciousness to the mix.

Together, the two Hayagriva horses,
represent the balance between the fires
of creation and destruction.

In this ritual of twilight Union, we will give focus to the Chakra of the Solar-Plexus, and its opposite at the Third-Eye.

We be practicing the horse-breath Pranayam techniques.

It is perhaps of note to mention that the horse is a creature that can travel at great speed without becoming short of breath – it is an unparalleled creature that channels breath into the fire of action.

We will practice inner and outer Horse Mudra, Mantra and Pranayam techniques that cool excess heat in the system on both physical and psychic levels…. Just as the horse is a veritable engine of power that can harness the forces of fire without overheating.

The practices of such horse formulas, can offer a profoundly cooling remedy to the fires that burn, in body, heart, mind and soul.

The Hayagriva Chalanas are the Yogic galloping and trotting moves of a horse, that we will ritualistically practice upon this full Moon, in the horsey quest of balance. Balance is Love.

← KALI MAA JAYANTI | 18.08. * Since time immemorial, by way of ritual, Tantrics have aligned to Kali Ma, and recieved her Darshan (vision) upon her ritual day. NAAGA PANCHAMI | 02.08. * Shravan is the Month that is sacred to the eternal Yogins Shakti and Shiva. Together they be the Yogic mistress and master of the Naaga energy. →