GANESH CHATURTHI | 30.08. * His trunk raising is indicative of Kundalini Shakti rising up when the Base-Chakra energy is nourished and grounded. 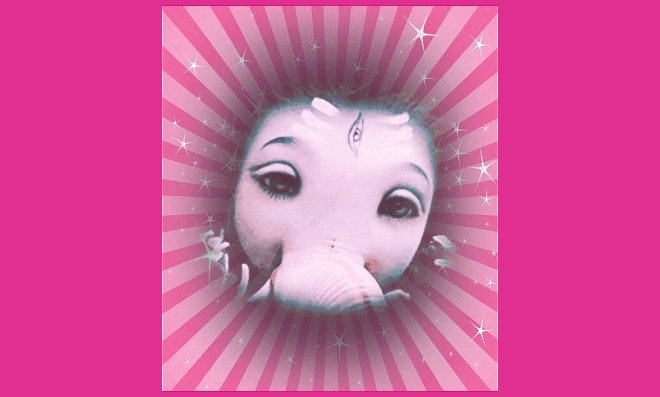 THE LORD OF FOUNDATION

TUESDAY THE 30th OF AUGUST

For this ritual, please have a handful of earth and a vessel of

water on your ritual altar.

When Ganesh is pleased, he raises his trunk and flaps his ears.

This tantric phrase referring to Ganesh holds much symbolism as to Ganesh’s significance.

Ganesh is the Elephant lord of the Base-Chakra.

His trunk raising is indicative of Kundalini Shakti rising up when the Base-Chakra energy is nourished and grounded.

When stray psychic energies are concentrated and given solid form and life, they then become sweet nourishment to the elephantine force of Ganesh.

‘Tis he who will focus the accumulated power that has been brought home, this he does with a move of his trunk.

Ganesh be the eternal resident of the 4th astrological Bhavan (house).

The deepest point of the sky. The realm of the mother.

He is the lord of earth, home and innocence.

He shows us that all comes from the base, the seat, the home, the foundation… the mother.

In Tantric cosmology the Moon of Ganesh Chaturthi is said to be amongst the most psychically destabilizing days of the year.
It is a time when all our unroofed tendencies are uprooted and exposed to the foundational vision of Ganesh.
And hence the Elephant ritual of Ganesh is applied with its practices that bring forth the polar opposite of instability… this is the stability of Ganesh.
He be lord of foundation.

Ganesh Chaturthi is an annual ritual day of grounding and weight.

This is the Moon that the Yogins do not dare to walk beneath or even look at… as it is said to have psychically dispersing effects.

Ganesh is evoked from the root of creation on this night for his stabilizing solidity and mastery of foundation.

Ganesh Chaturthi is celebrated on the 4th waxing lunar day after the dark Moon of the Yogic month of Bhadrapad, This is the month of the Kundalini serpent energy.

Orthodox rites have this day as a very dramatically festive time with much public and private home measures of worship.

Tantric ritual practices work with ritual invocation of the 21 fold energy of Ganesh on this night.

This ritual of the Chaturthi (4th) Moon of Ganesh has been kept preciously by Tantrics since timeless ages… for worshiping the foundation of all existence.

What is that foundation?

We will practice the Ganesh Elephant Mudras. These are practices of weight and earthing.

At elephant pace we will carefully apply formulas for sitting into the seat of all creation. That is the seat of Ganesh.

The elephant also goes ‘Mhaste’ as in is called in India. The elephant can charge ferociously with the force of all creation,

What is elephant pace?

Chaturthi means ‘fourth’ and refers to the 4th day following an Amavasya or Purnima of the Moon.

Each lunar Month has its Chaturthi days, where the Yogins call upon Ganesh for his teaching of foundation.

The Chaturthi in the Month of Bhadrapad is the most intense of all Chaturthi’s of tge year, and is considered as the grand Moon of calling upon Ganesh for his wisdom teaching.

The Chaturthi each month is a Moon phase marked by instability and dwindling power. The Moon energy of the Purnima & Amavasya is potent for the first 3 nights, and then on the 4th day, the lunar effects starts to subside.

This subsiding corresponds to a subsiding of psychic tension/magnetism within us that is pronounced and potent at the extremes of the dark and full lunar expressions.

The subsiding of inner psychic magnetism brings with is a state of psychic instability and uncertainty, hence the solidity of the elephant energy of Ganesh is invoked on the Chaturthi days.

The annual Ganesh Chaturthi is the lunar day where Tantrics invoke the energy of Ganesh. He be the master of foundation… through internal and external Mudra he is approached.

THE LORD OF FOUNDATION

When practicing with the elephant energy in this ritual of Ganesh, we will replicate the qualities of this heavy creature.

The inner Mudras will be characterized by weight and heavy focus. Such Mudras can bring grounding, and a maturing of psychic energy.

The 4 petals of the lotus Mooladhar Chakra, are 4 sounds that govern the 4 most physical elements: Earth, Water, Fire and Air.

The elephant is the only 4 legged creature that has 4 forward bending knees.
The 4 sided Yantra of the base Chakra is a square, and represents the 4 knees of the elemental elephant.

The elephant is itself the 5th element that foundationally informs all the others.

The square is a pictorial character of equality, formed by the balance of the 4 elements.

We will work with the Ganesh ruled elephant practices to bring stability to the foundations of our primary elements in the Mooladhar Chakra.
This will be the focus of this Tantric ritual.
We will be practicing the Gupt (hidden) inner and outer Mudras of the elements, and working with elephant Mantra.

The eternally eight year old baby Ganesh has the strength of innocence.

The strength of innocence is the very deepest secret hidden in the heart of Yog.

All the details of planets, numerology, stars and celestial lunarly tides and cosmic revolutions… seem complex and detailed.

Oh but the simplicity of the Subject is revealed by the innocence of Ganesh.

He be the one who writes all the scriptures in an eternal spiral of infinity.

Ganesh revealeth the simplicity within the most complex equations of the soul.

The only teaching of Yog be: Do the Yog

← BHUVANESHVARI JAYANTI | 07.09. * The Mahavidya Goddess Bhuvaneshvari is the guardian of the manifest universe. Her name means Goddess of all worlds. PITHORI AMAVASYA | 26.08. * This Dark Moon is an important annual junction in the Tantric calendar for connecting and working with our matrilineal ancestry. →