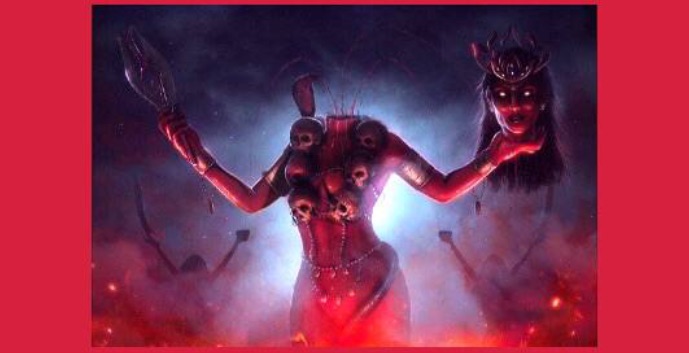 BLOOD-RED WISDOM OF THE GODDESS

Saturday the 14th of May

Oh Goddess Chinnamasta
Lust and desire is in your blood.
You show us the place where lust and desire belong.
You feed the Chandra Nadi;
You feed the Surya Nadi.
You are the dark Amvasya between,
You are the cut into the Purnima
The movement of desire do you teach.
Mistress of lunar and solar maneuvers you be.
You reveal the natural secrets of sex.
by showing us how to bow down
& let the tides of nature move us,
to you we bow

Chinnamasta Devi delights in trampling upon two lovers locked in sexual embrace. These lovers are Kama, who is the god of desire, and his wife Rati who rides upon him.

Rati is the Goddess of sexual lust and pleasure, she sits atop Kama, and upon her, Chinnamasta takes her Asan.

Chinnamasta has cut off her own head and holds it in her hand (left hand). Blood spurts out of her headless body in three channels.

Chinnamasta’s head drinks from the middle spring of blood.

On the right of Chinnamasta stands her devotee Varnini, who drinks from the right channel of blood.

On the left is her devotee Dakini, who drinks from the left channel of blood.

Chinnamasta is a nourishing Goddess.

Chinnamasta nourishes
the three channels of the spine,
known as Ida, Pingala
& Sushumna

These 3 are are the receptive and active channels, with the balancing force sandwiched between the two.

Sushumna Nadi as is it is called, is created from the balanced union of Chandra and Surya.

It is these channels of essential being that the Goddess Chinnamasta nourishes.

She nourishes these three aspects by three distinct forms of desire.

Dakini, on the left of Chinnamasta, represents the passive reception of desire, that is, the power to lay low and receive desire.

Varnini, on the Right of Chinnamasta, represents the power to actively step-forth and express desire.

The middle channel, which Chinnamasta herself drinks from, is the bridging union of the two opposites of desire.

The middle channel of Sushumna Nadi represents the secret of desire that lives between the opposites of desire. This is the lesson of the Goddess Chinnamasta.

Tantra is very much a practice that relates to receptive and active poles of energy.

Chinnamasta is the secret third element where the receptive and the active meet.

Her form is graphic. It sharply and directly emphasises the laws of energy exchange.

From the Tantric perspective,
all of our endeavours
fall within the realm
of active and passive desire.

Chinnamasta is a Goddess of sexual energy flow.

Ritual investigation of Chinnamasta can teach us about sexual energy and it’s three-fold nature.

This of course relates to sex directly, but it also encompasses the exchange of energy in general.

Chinnamasta Sadhana (the way, or path of Chinnamasta) is instinctual and primal. She opens the knots of repression and bound up love.

Chinnamasta is pure instinct itself. She is the secret that lives between the expression and reception of instinct.

Chinnamasta is the great giver: She beheads herself in order to give to her devotees.

The story goes that once the Goddess was wandering through creation with her devotees Dakini and Varnini.

The desire to live these expressions of energy reached an extreme point in her devotees and, quite suddenly, they became sexually aroused and urgently needed to experience the extremes of active and receptive desire.

Chinnamasta is the epitome of generosity, and she did not hesitate to meet the needs and desires of her devotees. She gave to both the receptive and the active requirements.

Chinnamasta in this way represents the work of the Kundalini channel with its threefold movement of energy.

Chinnamasta relates to all matters connected to blood.

She fortifies the blood, and reveals the Vidya (wisdom) of how to navigate in vampiric realms while maintaining health and vitality.

Her Vidya reveals such things as the the secrets of the lunar rhythms of sexuality and the mysteries of menstrual blood.

This night’s ritual is concerned with the study of blood, and our sexual life energy and desire in its three-fold aspects.

And more than this, it is a ritual night to know the unifier of these two expressions… that unifier is Chinamasta.

Chinamasta’s annual ritual night takes place on the 13th day of the ascending Moon, when the Moon is in the Nakshatra ( lunar mansion) of Chittra.

Chittra Nakshatra is the celestial jewel in the constellation of Virgo.

It is the Spica Star in the left hand of the reclining Virgin.

Her jewel shines with the secret lustre of the union of the two dualistic forces.

Her Jewel is the central point that is created by the meeting of polarities.

Chinamasta transmits the wisdom of sacred equilibrium. Her Jewel is the place where opposites and opposition are magically fused together.

On the 13th Moon day of Chinamasta, we see a dark slither of Moon… as in the picture above.

This dark slither represents the sword of Chinamasta with which she decapitates her own head.

Chinnamasta is the jewel of feminine sexual force

She is not a Shakti that is easy to look at directly for the active mind that the does not melt to the receptive feminine currents.

To honour Chinamasta is to be lovingly nourished.

This is encoded within the story of Chinnamasta that will be the investigation of this night’s ritual.

Honouring the feminine is a task most Tantric

← TWARITA DEVI | 22.5. * The half Moon junction is the time of unification of opposites, when the fluidic forces of the central spinal channel channel are activated BAGALAMUKHI | 08.5. * Bagalamukhi is the goddess who paralyses with her beauty. The story of Bagalamukhi references the colour gold quite centrally. →