30 | KALI JAYANTI | 30.8. * There are many tales which tell of Kali’s indomitable nature. She often tries and succeeds in leading Shiva astray into further levels of crazed madness. 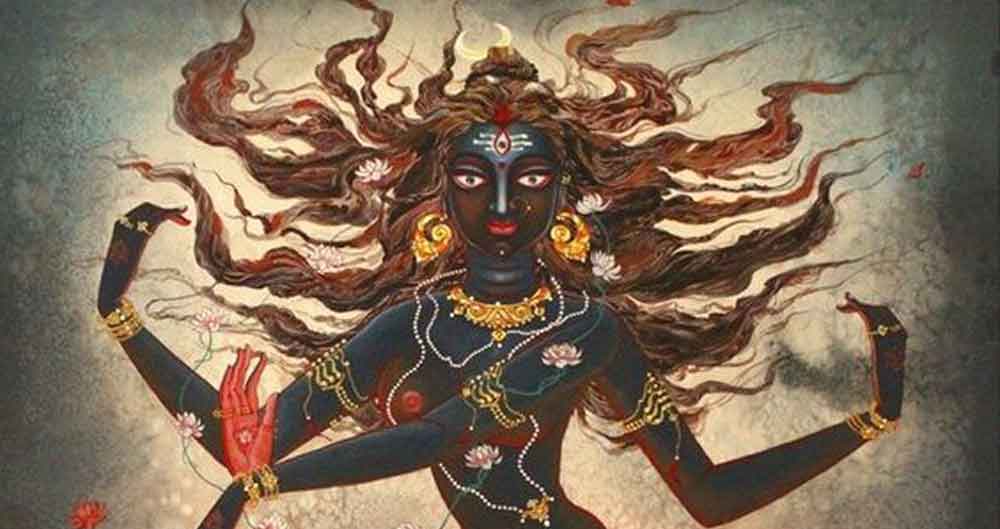 THE EIGHTH OF THE DASHA MAHAVIDYA
AN INITIATION INTO THE WISDOMS OF THE GODDESS.

Kali Ma is the Adi Mahavidya. She is the origin of all the Mahavidya Goddesses.
Kali Ma is the darkness that envelops the opposites and unifies them together in secret unseen wisdom. All the Mahavidyas are expressions of Kali Ma.
Sati is the Love of Shiva. When Sati has conflict with Shiva and becomes enraged and consumed with blood lust, she then turns into Kali Ma.

The unembellished wisdom
of impulse and instinct
is the power of Kali Ma.

Kali Ma herself further multiplies into all the other Mahavidya Goddesses.
Kali Ma is the original womb that births all forms, both subtle and manifest. Hence her title as Adi Mahavidya, ‘the original Wisdom Goddess’.

Her Vahaan (vehicle) is a Preta (ghost) with which she can ride across and beyond the boundaries of Time and Space. Kali is the feminine of Kala (time), her name means ‘the dark one and that which negates Kala (time)’. For this one often sees images of Kali trampling her Lover Shiva as Kala underfoot.

The central Tantric image of Kali trampling upon Shiva holds many mystical meanings. Various texts give different interpretations of the timeless image. Secrets of meaning are revealed by meditation on the image.
It is often called the Daksina Kali. Daksina implies the right foot, for it is the right foot that holds Shiva to the ground. Vama Kali is the image reversed, where it is the left foot that holds down Shiva. Both forms have different significance in Tantra.  As Kali stands on his heart, Shiva becomes sexually aroused as is shown in the less conservative depictions.

She wears a necklace of severed heads and her eyes are deep dark pools without end.
She is the consumer of life.
Her hymns name her as the consumer of Rajas and Bindu – that is, the drinker of Blood and Seed.

Tales of the Tantric Goddess

The stories of Kali tell of the fate of the near invincible Asura Raktbija. Raktbija epitomises the self-perpetuating destructive urge.  He would not be defeated and would recreate further forms of himself wherever a drop if his blood would spill – Rakt in his name means blood, and Bija means Seed. So literally, ‘he who’s every drop of blood is a seed’.

By this power he was invincible, for in battle he only grew more and more powerful and ‘numerous’. Only Kali Ma had the ferocity to consume his endless duplicates and defeat him. She drunk every drop of his blood until there was nothing left of him. Kali is the consuming force that can never be escaped or sidestepped. As the consumer of the Raktbija – seed and blood – she is called Rakteshvari.

Her infamous bloodlust knows no limits, the story goes on to tell how when Raktbija is consumed by Kali Ma, she becomes unstoppable and continues to consume life until Shiva intervenes, slicing the consuming rage that threatened to consume everything, including himself. The solution was to place an innocent child before her. In doing so her motherly instincts were aroused and in an instant she became the nurturing mother of womb power.
There are many tales which tell of her indomitable nature, she often tries and succeeds in leading Shiva astray into further levels of crazed madness. Wherever Kali Ma appears, there is discord, disorder and destruction. She destroys established order and structure.

The destruction that Kali Ma brings is the death of the known and the rigid structures that imprison the wild feminine. She is the dark eclipsed feminine that lives in the dark shadows; she rules the places where secret life grows. She is the hidden power within the dark womb.

Kali Ma’s ritual works with dissolving all boundaries, it is a work with the dark. Black is the colour of the womb, it contains all colours and absorbs all colours. The work with Kali Ma is a healing work that swallows our formations and illusions and births the unseeable.
Kriim Kliim are the her mantras that are embraced on her night of healing ritual, they are the sounds that arouse and awaken the unseen femmine, she goes by the name of Kali Ma – The Dark Feminine.

← 31 | PITHORI AMVASYA | 06.9. * Mata Puja is a time of healing of the matrilineal line, that is why it is known as the Mothers’ Moon. 29 | HAYAGRIVA JAYANTI | 22.8. * This is the annual festival of the Horse. Hayagriva is the horse god of the twilight wisdom twixt shadow and light. →