18 | BAGALAMUKHI JAYANTI | 20.5. * Upon this Half Waxing ritual night, we shall approach Bagalamukhi with the prayer of receiving Kechari Vidya (wisdom of speech). 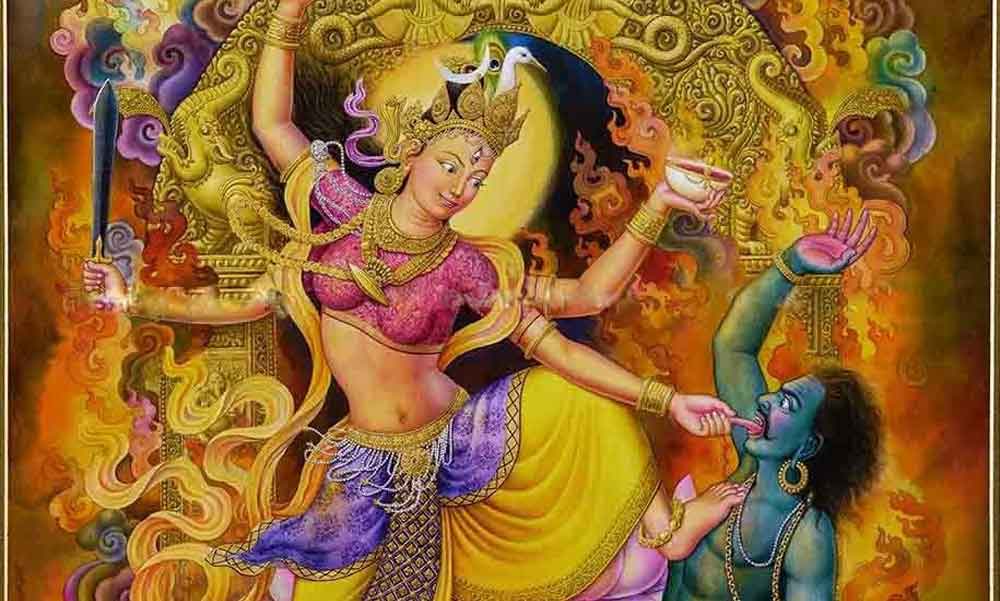 THE FIFTH OF THE DASHA MAHAVIDYA
AN INITIATION INTO THE WISDOMS OF THE GODDESS.

“Oh Goddess Bagalamukhi.
Some say the yellow one.
We see you glowing in gold,
& coming from the east.
You are the great paralysis.
We gather upon your birthday
to courageously come to honour
the wake up shock that you administer.
You are the great shock that pierces the chakra
and brings us to silence.”

Bagalamukhi is the goddess who paralyses with her beauty.
The story of Bagalamukhi references the colour gold quite centrally. It starts in the Golden Age of Krita Yuga. One of the 4 ages in the line of Silver, Bronze, and Iron ages.

The golden Krita Age is the age of Earthly Harmony. Bagalamukhi appears from a golden pond of Turmeric (the sacred Haridra pond), emerging in dazzling beauty, golden clothes and skin dyed gold by the Turmeric. Her golden jewelry chimed through infinity as she walked with effulgent grace.

Bhagalamukhi was summoned by the golden God Pitambara (Vishnu, as the seared of Yellow clothes).
Pitambara is keeper of the Golden Age, and when a storm came to threaten his golden order, he prayed deeply until the goddess of the three worlds, Tripuri Lalita, appeared before him and offered him a precious gift. The gift was the golden beauty Bagalamukhi, who appeared from the sacred pond as a golden goddess. Her beauty, manifested upon Earth, was paralyzing.

Bagalamukhi means the one who paralyses through her gaze. The golden God Pitambara could once again rest into his golden world as Bagalamukhi paralyzed the impending storm with her beauty. She did it through her golden gaze, which is why she also goes by the name of Pitambari, ‘the one with the golden gaze’.

The Solar Plexus | & its opposite

The Golden pond called Haridra takes its name from the root spice known as Turmeric.
The pond represents the Solar Plexus Chakra, whose colour is yellow. The opposite colour in the spectrum to yellow is Indigo. The indigo chakra is the Ajna Chakra at the Third eye, with which the Solar is connected as its opposite. The Third eye is ruled by the Dark (new) Moon, whereas the Solar plexus is ruled by, as the name suggests, the Sun. The two coexist as opposite polarities which are meant to live in balance.

In Tantra, opposite polarities hold a secret: they attract and repel each other, just like night and day, hot and cold, male and female.

When polarities exist in perfect balance
a new vision of reality can be acquired,
and this vision is revealed
by Bagalamukhi’s golden gaze.

Bagalamukhi is worshipped on this night in pursuit of finding and transcending opposing polarities to reveal a new vision that can restore balance within our inner and outer worlds. This detail is one of the keys to Bagalamukhi ritual worship.

The Vagus nerve is stimulated through the tongue. Particular placements of the tongue all have their specific functions. Kechari Vidya (wisdom of Kechari) is a secret practice that is initiated upon Bagalamukhi Jayanti. Specific mudras and mantras in combination with the movements of the tongue can send the energy up to the third eye, or down to the sexual chakra, or to the solar plexus. According to the placement of the tongue, the whole system of chakric energies can be altered.

The Goddess who pulls the Tongue Northward

This brings us to another myth that relates to Bagalamukhi.
When we see the Goddess Bagalamukhi in pictures, she is portrayed as pulling out the tongue of a ghoulish looking little man with bulging eyes.

Madan was a yogi who became Asuric (destructive) after he gained the Siddhi of Kechari Mudra. This is the siddhi of speech, often referred to as Vakk siddhi – those who work with the Kechari Mudra of the tongue in very deep ways get the power of speech, in the sense that what is said can become manifest. For this reason Kechari yogis are careful and sometimes very reserved with speech.
Now, the Asura Madan had the power of Kechari Mudra, but his heart was eclipsed by bitterness, and so he cursed left, right and centre and caused much suffering.

The golden glowing goddess appeared in the midst of his rampage and stunned his eclipsed heart and pulled his tongue in the Northern direction, bringing his energies into communion with his third eye.
The upward movement of the tongue connects the sexual energies and digestive fires with the subtle energies of the third eye.

Bagalamukhi
is the Goddess force
that draws the gold out of the swamp
of habitual murky dwelling.

And so upon this Half Waxing ritual night, we shall approach Bagalamukhi with the prayer of receiving Kechari Vidya.
This is a ritual of working with the solar forces as mirrored in the rising moon. Studying the impact of our active words, not only the spoken words, but also the words that resound and colour our innermost being. Some of these practices will be preliminaries to attaining the Full Northern Mudras of Kechari.

Bagalamuki Jayanti will take place under the auspices of the Magha Nakshatra (lunar constellation), that is the Star of Heritage & Power, which facilitates the healing work with our ancestral line. To find out more about this star, click here.