06 | KHODIYAR MAA JAYANTI | 20.2. * The second ritual in this series is dedicated to Khodiyar Maa. Khodiyar Maa is linked to the womb and to childbirth… 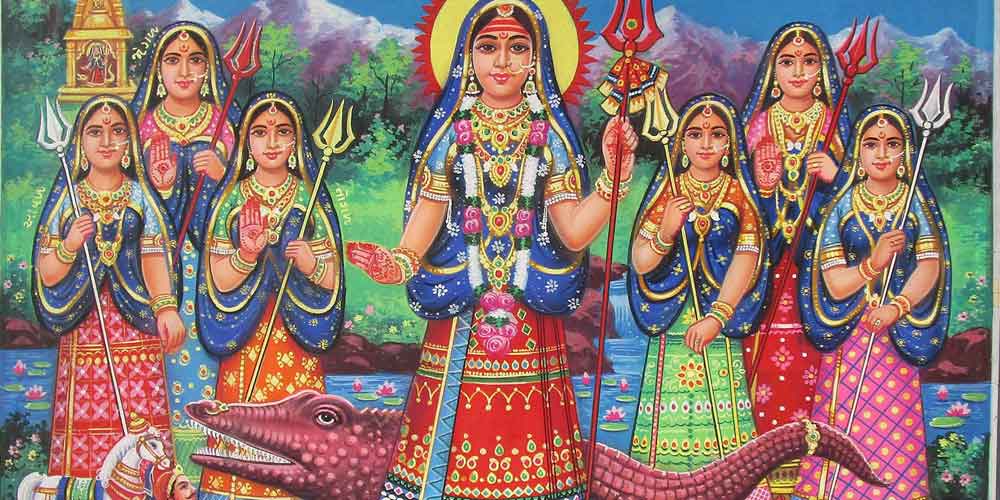 ‘’She is a fearless Goddess
who will ride deep
into the bowels of the underworld
to bring about healing.’’

When looking at the Goddesses in Tantra, we notice that their stories point to energetic principles. A Goddess is a whole world of energetic principles made manifest. In any branch of life, the focus of force is a law for creation. The work of a Tantric practitioner is to condense and concentrate their forces into a focused point and to align with the world of the Goddess behind her archetypal representation.

By aligning to a Goddess, we bring vast movements to our lives. It takes work and focus and is no flimsy affair of wishful thinking and good intentions. Tantra is a practical subject that magically accesses the Goddess energies through concentrated techniques and ritual applications. The techniques are not random, but work with a scientifically detailed system of aligning to astral and lunar currents. Mudra and Mantra become doorways, linking our lives to the energies of the Goddess and allowing for much healing. Just as there is a herb for every ailment – there is a Goddess principle for all our human trials and tribulations.

Khodiyar Maa is the Goddess we shall work with in this ritual, the Goddess of Sexual Healing, she who rides between earth and water on the Crocodile. Though not vastly known, she is highly honoured by Tantrics. Having a wider appearance in Gujarat and Rajasthan which lay over 7000 Km apart from each other, Khodiyar Maa is worshipped by Tantrics on her Jayanti, the half rising Moon, which this year falls on 20th February.

At the first ascending half moon of January, the crocodile’s moves further to land, but its tail is still in the water. At the third half ascending moon of Khodiyar Maa Jayanti, Makara the crocodile is fully revealed. The two lunar halves of the half rising moon are mirrored to us upon Khodiyar Maa’s annual Lunar day – halves apparent in the symbol of the crocodile, the amphibious creature that can transition between water and earth.

Emerging 3 Aspects of Soul and Being

The three moons relate to what Yog calls the 3 worlds of Trilokh (lokh means world); they are the worlds of the unconscious, earthly and ultra-conscious. The crocodile upon this yearly junction is in full emergence in all these 3 aspects of our being. An intersecting of these aspects of our soul occur and are revealed at the level of the sexual chakra upon Khodiyar Maa Jayanti. Indeed, Uttarayana is the period of rising sexual energy, where the Kundalini climbs through the chakras by the pull of the magnetic celestial currents upon her.

The base Chakra is linked to the earth element and the second Chakra is ruled by the water element. The crocodile is the animal that relates to the water-ruled sexual Chakra which is known to the Tantrics as the Shaktistan. Tantrics work with the crocodile energy and the sexual chakra upon this ritual day and night with ritual Mantra and Mudra. The awakening and healing of the crocodile-ruled sexual chakra is a primary occupation at this junction.

The story of Khodiyar Maa, shows how she transitions between both elements, earth and water, riding upon the back of a crocodile – her Vahaannh or power animal – to bring the healing elixir up from the depths. A narrative of yogic symbols is relayed, relating to the healing of the base and sexual chakras. Khodiyar Maa has temples that are often located next to rivers. In some parts, legend has it that a real crocodile emerges from the waters to give Darshan (vision). Makara the crocodile represents the dual potentials and polarities of the sexual force – able to root into the depths while equally able to rise and reveal.

She Who Stops at Nothing to Assist the Living

Khodiyar Maa is linked to the womb and to childbirth, and the marriage between the base and sexual Chakras. She is a Goddess who shows us how to unite the energies of Earth and Water – first and second Chakra themes are her speciality. Working with Khodiyar Maa ritualistically can help those wishing to conceive a child. She is a powerful Matriarch to those wishing to work with the sexual energy and its healing.

Khodiyar Maa is a Goddess who addresses physical handicaps and impediments. Indeed, her name means ‘the Goddess who hobbles and limps from an injury’, as she herself has an injury that causes her to limp. She addresses emergencies and is a profoundly helpful force that will stop at nothing to address the problems of life and living.

Read our Blog Post to learn about the Tantric tale of Khodiyar Maa and how she limped out of the depths with the healing elixir.

← 07 | LALITA JAYANTI | 27.2. * Lalita’s cooling Lunar fire offers us a receptive, comforting place in which to cool down into the very simple and innocent sweetness, 05 | GANESH JAYANTI | 15.2. * This series is concerned with working with Animal Powers, the Elements and the Chakras. →