05 | GANESH JAYANTI | 15.2. * This series is concerned with working with Animal Powers, the Elements and the Chakras. 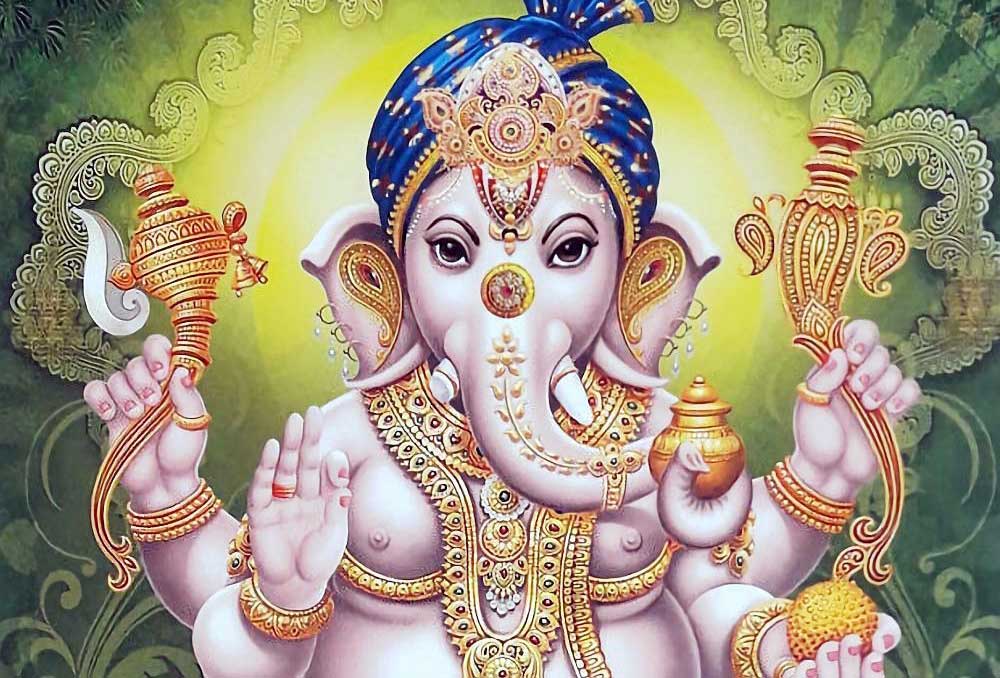 ‘’In Tantric cosmology
this Chaturthi Moon day
is said to be amongst the most
psychically destabilizing days
of the year.’’

This coming ritual night is concerned with establishing foundations. This Jayanti day is the Birthday of the Elephant God Ganesh. He is the Earth deity that guards the doorway of manifest grounded power.

Ganesh is honoured by Tantrics on the Chaturthi day each month, Chaturthi means fourth and refers to the 4th day following a New Moon or Full Moon. In Tantric cosmology this Chaturthi Moon day is said to be amongst the most psychically destabilizing days and hence the Elephant ritual is a practice that fills the polar opposite of instability by its stability.

The Moon energy of the Full and New Moon is potent for the first 3 nights and then on the 4th day its effects start to subside. This subsiding corresponds to a subsiding of psychic tension/magnetism within us that is pronounced and potent at the extremes of the New and Full lunar expressions. The subsiding of inner psychic magnetism brings with is a state of psychic instability and uncertainty, hence the solidity of the Elephant energy is invoked on the Chaturthi days.

This ritual is a magical focussed undertaking of weighting our forces into the roots of earthly being. When the foundation is heavy, immovable and as grounded as an elephant, then and only then, can the branches of our being branch out and give the fruit of spiritual being. This same law holds true when considering the harvest of earthly fruits upon the tree of life.

The tendency of spiritual practices is to uproot our structures and stir up the psychic forces. The word Laghoo refers to a yogic aspirant, Laghoo implies expansive ethereal expression and lightness. But without the weight of the Base chakra that is presided over by the Elephant God Ganesh – the forces of our being can become dispersed in the unbearable lightness of being. A flimsy and impotently unempowered life is the result of lacking root.

And so, upon this ritual day and night, since aeons long, the Tantrics have reserved a ritual of Jayanti for the rooting and nourishing weight of Ganesh. A Jayanti is a ritual time of birthing, and this particular ritual day is dedicated to birthing the Rooted elephant power of the Base Chakra. ”Seek ye first the foundation and all things shall be added” this axiom is a reminder that the fruit is only as sweet as the Roots are Deep.

Ganesh brings earthy harvest in life if the roots that he presides over are honoured and watered. This ritual night is a concentrated prayerful attempt to find the roots of our being and nourish them through harnessing the psychic currents of Elephant power.

‘When Ganesh is happy he raises his trunk and flaps his ears’. This happiness of which the Yogins speak, is the ascent of the Kundalini serpent, represented by the Trunk of Ganesh. Ganesh is the Chakravatin, that means the one upon who the whole system of the Chakras spins upon. The constellation of all the Chakras orbits around the base. The seat of Ganesh is the Mooladhar Chakra. Mool means root and Adhar is the base. The foundation of our being, when weighed in the heavy and steady power of the Elephant – creates foundation of life, upon which all the Chakras spin.

All those who seek spiritual fruits in life and recognise the need for earthly roots are called to this ritual. All those who would tread the slow and steady paced path of the Elephant power – void of skywalking wishfulness and empty power, are summoned to celebrate the birth of the Earth Guardian Ganesh.

← 06 | KHODIYAR MAA JAYANTI | 20.2. * The second ritual in this series is dedicated to Khodiyar Maa. Khodiyar Maa is linked to the womb and to childbirth… 01 | BHAIRAV ASTAMI | 6.1. * Bhaivar Astami is a time in which to study the deep dark layers of oneself, shedding the outer layers like a snake, to reach the mysteries beyond the threshold of time. →