LORD OF THe SKELETON STICK

Oh Bhairav,
Ruler of the North,
You who are the House of Death,
And the Death itself,
You who are Time,
Teach us the secrets of Fear and Devotion,
Maha Kaal Siddhi be yours to teach,
The magical secret beyond time

Kaal Bhairav Astami is a time
in which to study
the deep dark layers of oneself,
shedding the outer layers
like a snake,
to reach the mysteries
beyond the threshold of time.

Kaal Bhairav is the Tantric deity of darkness and fear. The 8th night of lunar waning every month is Sacred to Kaal Bhairav, the darkest form of Shiva.
The 8h descending lunar night is known as Kaal Bhairav Astami.
Kaal means time, Astami means the eighth.

He is represented as the crow master who rides upon wild black dog.
Crows and black dogs belong to his realm and are the messengers of his secrets.

Kaal Bhairav is the darkest emissary of the heavy, crushing and slow planet Saturn.
On the half Moon night of Kaal Bhairav, Tantrics spend time in a manner most Saturnian, investigating the dark layers of being.

In the ritualistic circle of Tantra Kaal Bhairav Ashtami is a time in which to study the deep dark layers of ourselves, peeling away the outer layers like an onion to reach the sometimes tear-inducing taboos of the nether-regions.   Subjects such as death, fear and time are approached upon his ritual night.

IN FEAR We find Devotion

Bhairav is the ultimate destroyer.
The story tells that it was he who beheaded even the creator. Bhairav suffered for it, yes! whereas the creator found liberation.

Kaal Bhairav ritual follows the narrative of the subtle tale of his journey to the North. It is a tale that encompases the deepest and darkest corners of the soul, not to mention the most destructive aspects. 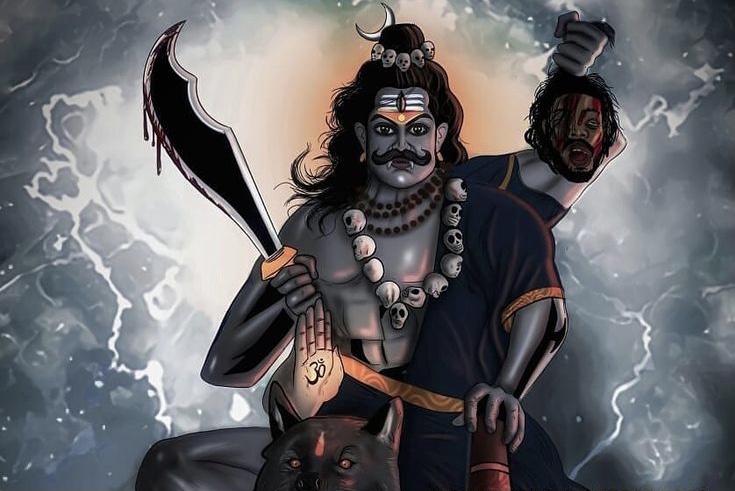 The story tells that, after Kaal Bhairav beheaded the creator, he could not get free of what he had done.
Destruction and creation literally stuck together, as the head of the creator stuck to Kaal Bhairav’s hand and rotted putridly for aeons upon aeons. In the end Bhairav finally crossed the invisible line between life and death and traversed the threshold of creation and of destruction.

This story points to an inner reality that is to be meditated on.
Life and time, creation and death, all hold hands in the fear-inducing realm of a Kaal Bhairav.

Within Tantra
the Kaal Bhairav ritual & practices
are highly secretive.
They are to be proceeded with caution,
for they arouse
our deepest & darkest
innermost fears.

Raising fear carries a great healing power if one works with the raised material in the landscape of the soul.

The various names of Kaal Bhairava are powerful Mantras that move repressed fears in us.
The freedom of finding and facing repressed fears, frees us from agitation as there is nothing to move away from, this works like a mirror, there is then also nothing to move towards either.
The place of Yog comes in this inner constellation.
Drive dies and spirit force takes its place.

The creative spiritual impulse
is not free of death,
for creativity without death
is stagnation.

The Direction of the Spirit 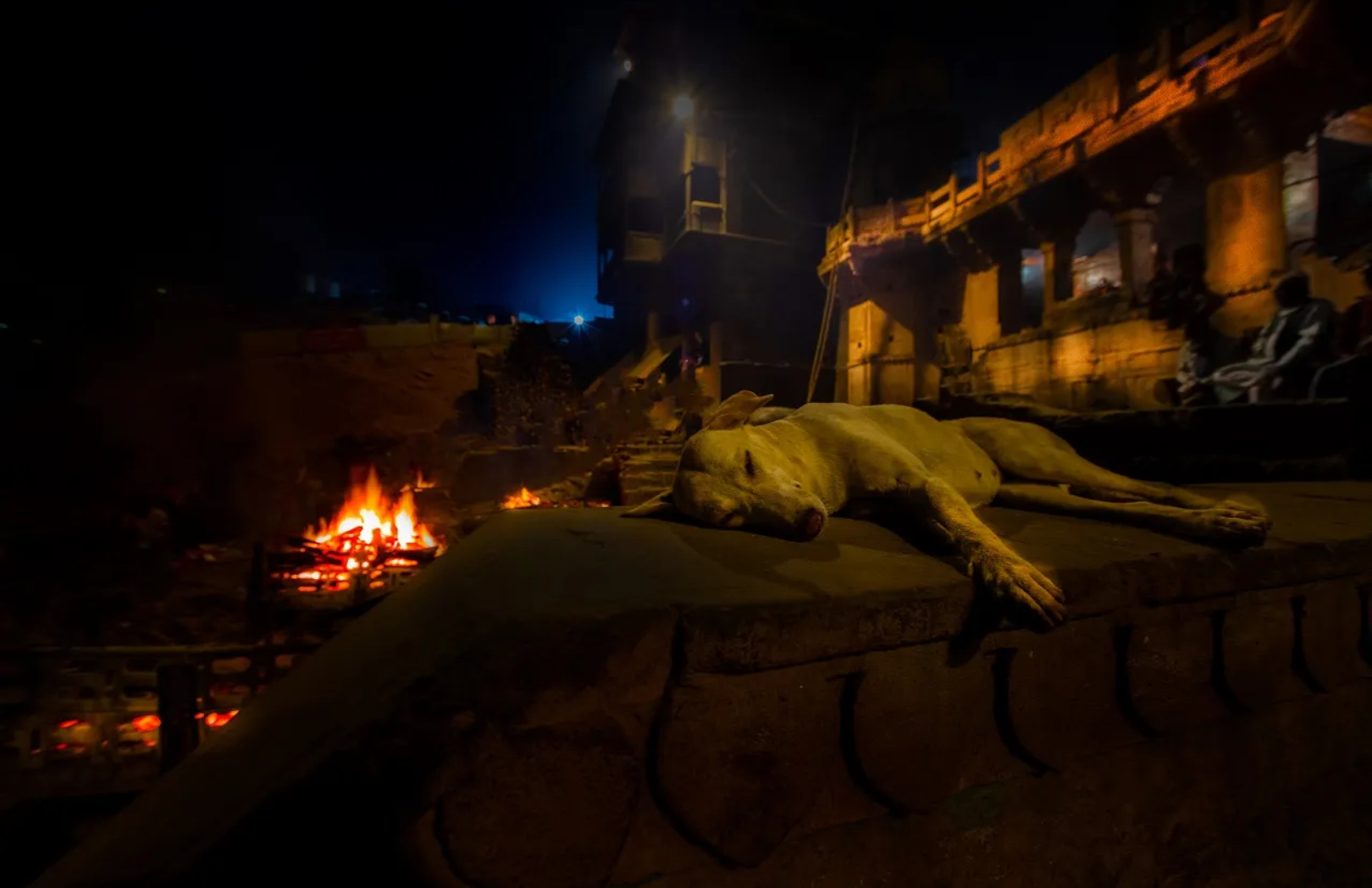 Bhairav is the ruler of the North.
North flowing rivers take the spirit out of the body. The dead are placed to the North in accordance with Tantric wisdom.
The liberated spirit goes North beyond the grip of the illusions of the astral plane.
Kaal Bhairav is the God of Kashi (today renamed ‘Varanasi’), the sacred city of death… the place in India where the Ganga river flows North.

Kaal Bhairav is a deep friend, liberator and protector, if he is approached in honour.

He holds the Danda, the stick of power he gained after aeons of pondering the dead creator’s head in his hand. His stick is called Kankala Danda, literally the ‘skeleton stick’.
The stick of Kaal Bhairav gives the protection of courage to go under the surface of skin and flesh.It gives courage to go right to the very bone of the matters that weigh most upon us.
Bhairav asks us ‘are we here to live or are we here to die?

Upon the occasion of Kaal Bhairav Ashtami, the Tantric practitioner tunes to the celestial and atmospheric waves of nature and harnesses the flood of spirit.

The Tantric comes to know that destruction is the other hand of creation, both go together in the cyclic danceof death & life. Both destruction & creation go hand in hand.
By tradition, his Bija mantra is never written, but it will be uttered in this dark night’s ritual.

His mudras are Maha Kaal Asan and Kashi Mudra. These physical movements send the spirit North to the world beyond.

Maha Kaal asan takes a step through the three worlds. It reaches skyward, whilst rooting deeply. It requires the focus of the middle realm that we inhabit.
This Mudra teaches us slowly of the walk – called life – we take through the triple realm of being.

The inner and outer Danda Mudras are practiced, including the antar Kankala mudra (the inner skeleton practice)…

Kaal Bhairav offers a dark ritual of calling upon one’s death, not suitable for the faint hearted or the spiritual consumerist and sensationalist.

Tantra may have become sensationalised as pleasure and spiritual indulgence, easy to buy into in the modern era.
But the old-school rules of Kaal Bhairav are within the timeless Saturnian laws.

Under Kaal Bhairav’s  jurisdiction, the taboo – even unto ourselves –is approached upon his ritual night.
He can show us the lessons we are not learning and having to repeat for lifetimes long. But he demands that we have courage to face our pain as well as our pleasure, for pleasure alone does not fill the cup in his realm.

Just like Shuni (the planet Saturn) that he is, Kaal Bhairav, takes us beyond and far behind the limits of darkness, death and time, he is heavy and slow and gives depth to the soul who dares to meet his gaze. The soul who dares to face themselves in the dark finds a deep friend.

Time is indeed of the essence.
It may contain the essence itself, but our time can be something devoid of magic. It then becomes something to waste away when it is barren of Moonlit-Magic.

Some of the modern rituals we repeat daily are worth our investigation. If something is repeatedly done with our concentration then it becomes a ritual.

Rituals colour the quality of time.
Time is there but can it really be seen?
The effects of time certainly may be seen, such as waking at a specific hour to fulfill a duty, or the effects of not sleeping enough.
But what is time without the effects through which we know it?

Does it then exist at all?

Kaal Bhairav brings us to the vision of time.
Earthly time is known through the bark, growl & howl of his wild black dog.

It is on the half darkening descent of the Moon that Kaal Bhairav is closest.
When he comes, that which lives in the closet of the soul can be glimpsed and heard by visioning within and listening to the Moon splitting howl of wilderness that he bringeth. 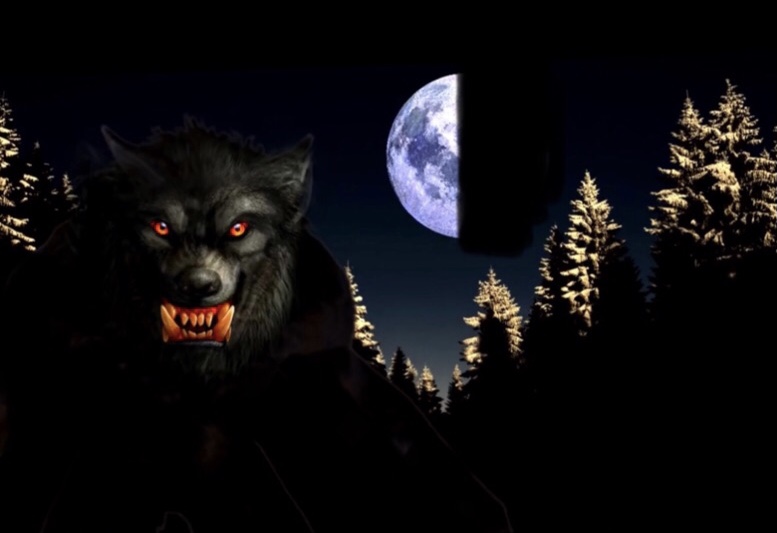 Rituals
can both entrap
and liberate.

Kaal Bhairav ritual-worship has the potential to show us the most obvious yet easily unseen things of what we are doing with time – or perhaps what time is doing with us.
Some types of ritual worship of Kaal Bhairav involves offering or consuming alcohol. There are strict ritual measures around such practices which are given in the initiation circles of Tantra.

Kaal Bhairav is not drunkness….
On the very contrary, he is the great sobriety that exists somewhere between birth and death. 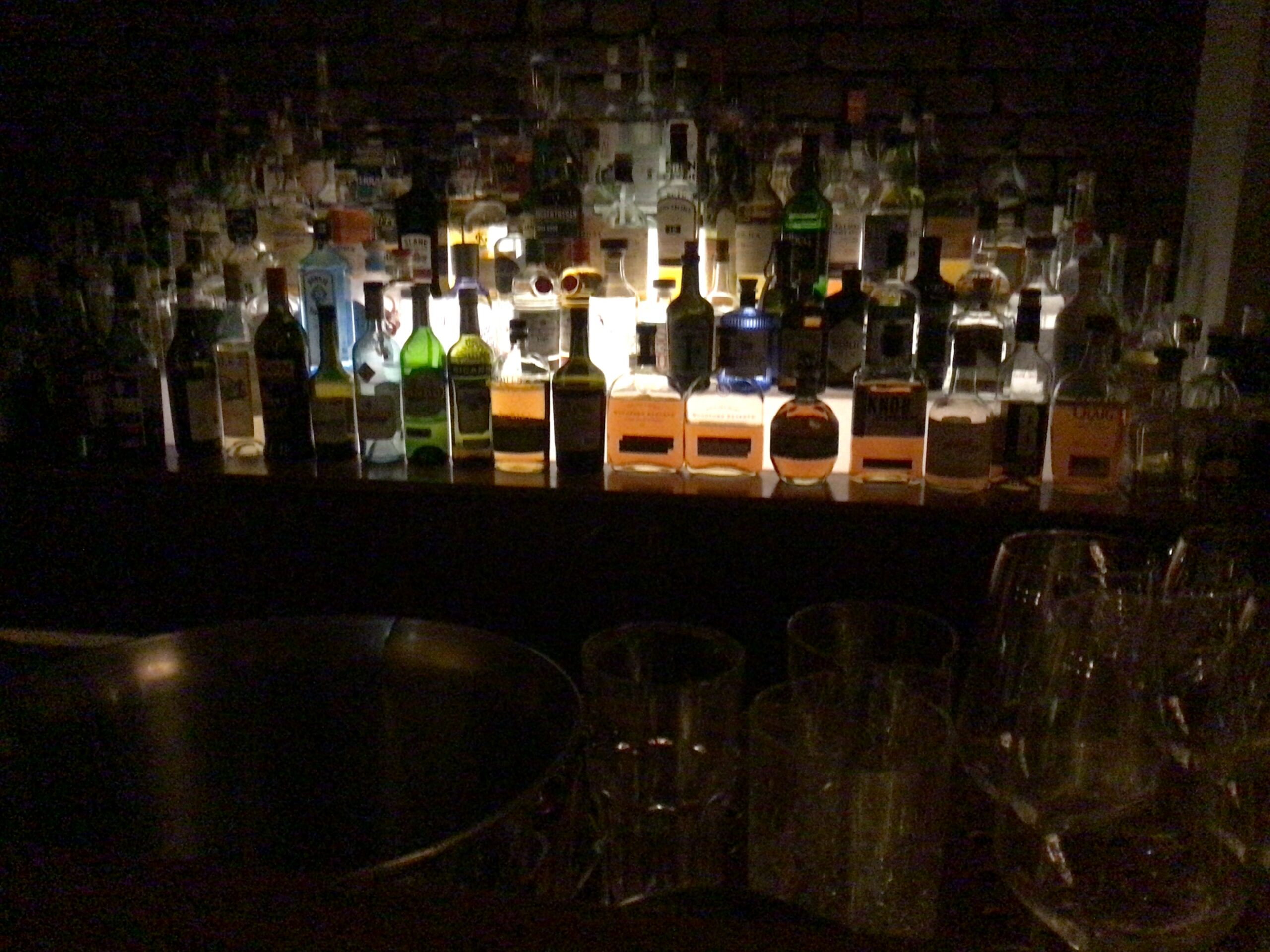 Kaal Bhairav
teaches the wisdom of death.
He shows us that
the creative spiritual impulse
is not free of death,
for creation without death
is stagnation. 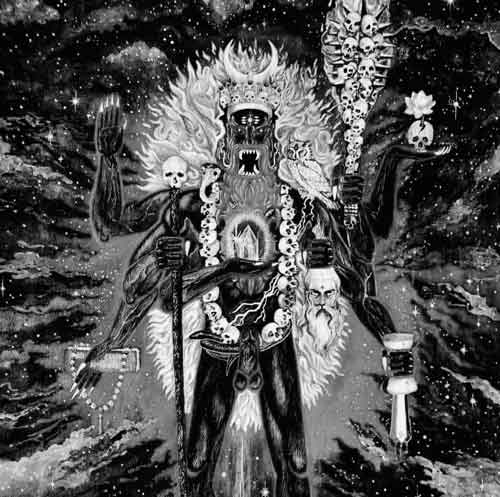 Kaal Bhairav is a deep friend, liberator and protector, if he is approached in honour.
He holds the Danda, the stick of power. Dandapatti means the friend of ‘the stick’, or ‘the friend with the stick’.
It is the magic wand of the wizard and broomstick of the witch. It is the spine that flows with the dance of circuitry in the currents of life and death. It is the stick within grasp when we study the mysteries of Kaal Bhairav. 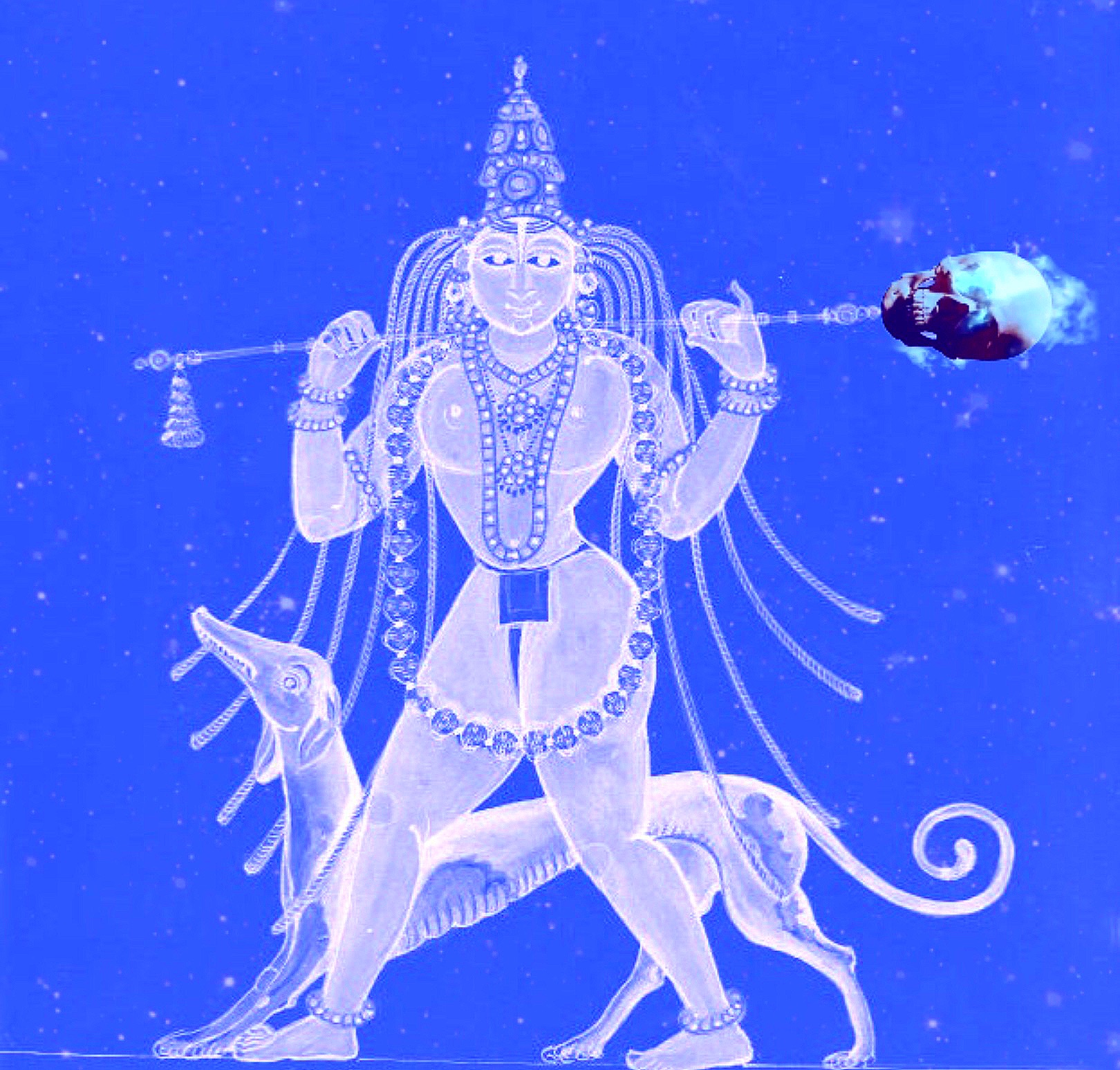 The stick of power that Kaal Bhairav carries represents the measurement of time, it is topped by a skull that signifies the mystery beyond time.

As well as teaching us
how to live,
Kaal Bhairav equally teaches us
how to die.

Many may be consumed with the issue of  ‘how to live’, but the Tantric equally concerns themselves with ‘how to die’.

Kaal Bhairav can show us
the lessons we are not learning
and having to repeat
for lifetimes long.